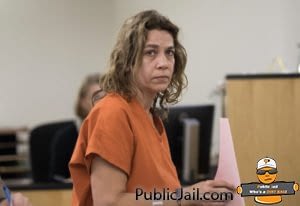 A La Center woman allegedly set multiple fires inside her mobile home last week because she wanted to punish her former boyfriend for breaking up with her, according to court documents. He had moved out of the residence days prior.

Clem is accused of setting fire to a mattress, kitchen table cloth and living room curtains, court records show, and called her former live-in boyfriend and made threats to perish in the fire, according to the Clark County Sheriff’s Office.

The man told deputies that Clem had on numerous occasions threatened to burn down the home or shoot herself with his firearms because he broke up with her, according to a probable cause affidavit.

Firefighters rescued Clem from the burning home after she was found semiconscious on the floor, according to Clark County Fire & Rescue. Clem was found near the back door, and it appeared she had attempted to leave the residence, the affidavit states.

She was subsequently taken to PeaceHealth Southwest Medical Center to receive treatment.

According to court records, Clem’s daughter reported that her mother may have mental health issues.

On Monday, Judge Scott Collier appointed Clem an attorney and set her bail at $30,000.

She will be arraigned Dec. 6.